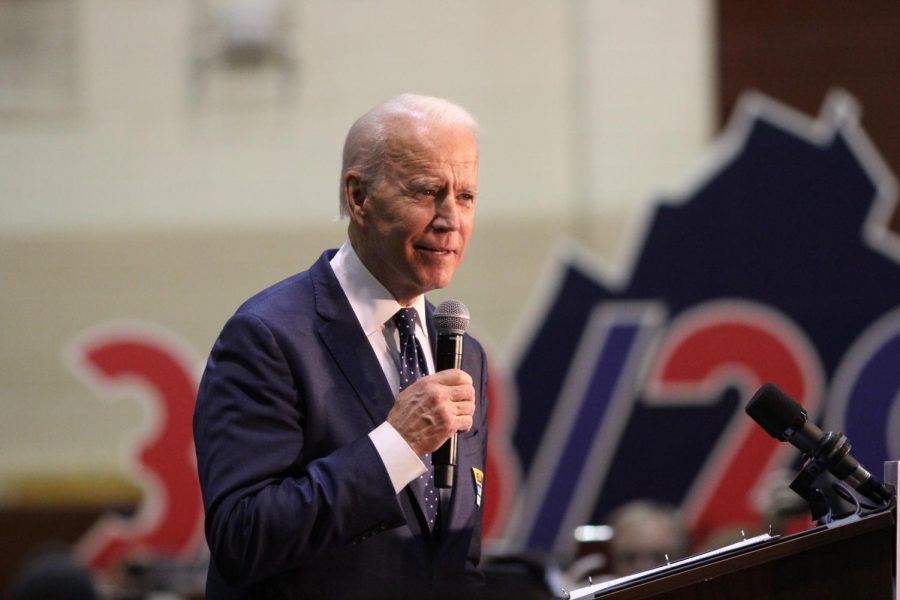 Joseph R. Biden has been declared president-elect of the United States with 306 electoral college vote defeating incumbent Donald Trump, who has served one term. The 2020 United States Election set a record for voter turnout amidst the COVID-19 pandemic. ..

The candidates each traveled to different states in a last attempt to rally the troops on the big day. Joe Biden traveled to his hometown of Scranton with two of his grandchildren, Finnegan and Naomi. They paid a visit to his childhood home where the candidate signed a living room wall, writing, “From this house to the White House with the Grace of God.” From there Biden traveled to Philadelphia, Pennsylvania, a battleground state before ending his campaigning in Delaware to watch as the numbers came in.

At exactly midnight on Tuesday morning, the United States continued the tradition of casting the first five ballots in Dixville Notch, New Hampshire for the 60th year in the row. As of the 2010 census, Dixville Notch only had 12 citizens of their tiny town. All five ballots were swept in favor of the Former Vice President Joseph R. Biden. Many found this telling but Americans had no idea what they were in for with the next 72 hours bringing irregularities and no winner declared.

In Nebraska, the morning started chaotically, with residents receiving Robocalls telling them to, “Stay safe and stay home.” Nebraska’s Secretary of State encouraged people to ignore the call, saying, “Our voters and our poll workers will be kept safe. Elections matter and your vote counts” Nebraska was not the only state to report these incidents, with the calls also occurring in Michigan, Iowa, and Kansas.

At 2:30 P.M. EST, election officials made the decision to extend polling hours in North Carolina after certain locations opened while others endured printer problems. In many states, new voter registration spiked with Michigan registering 12,000 new voters.

By 7:00 P.M. EST, the first round of polls began to close and show results. About 10 minutes after closing the polls, CNN projected Trump to win Indiana. Before polls closed in Pennsylvania, their governor sent a message to his constituents saying, “We may not know the results today, but I encourage all of us to take a deep breath and be patient. What is most important is that we have accurate results, even if that takes a little longer.”

At 7:30 P.M. EST, Nevada polling locations were given permission to extend their hours in Clark County after a delayed opening due to technical difficulties–he G.O.P. had called for the extension in hopesof bringing in more votes for President Trump.

At 8 P.M. EST, 17 states closed their polls and began the through process of counting millions of ballots. As projected, the President started to win the southern states including Kentucky, Tennessee, and West Virginia. As people awaited the closing of polls on the west coast, they turned their eyes to battleground states Florida and Ohio. Pre-election polls left the Biden campaign feeling encouraged while President Trump was determined to win his home state. Another state proving to be crucial was Pennsylvania with its 23 votes. Trump had won it in 2016, however the former Vice President campaign heavily in hishome state, and it was truly up for grabs.

Biden then went on to win New York at 9 P.M. EST. As of that time, 13 more states closed their polls with President Trump winning Arkansas and Biden winning New Jersey.

CNN projected South and North Dakota for the President, states he had also won in 2016. The former Vice President went on to win Connecticut, New Mexico, and Colorado. Colorado, a state that has become democratic over the last 20 years, also flipped a senate seat blue this election. Former Governor John Hickenlooper beat the incumbent Republican Cory Gardener by 300,000 votes. As the night continued, Alabama and South Carolina were called for Trump and it became clear that Florida would not end in the blue landslide that the Democrats had hoped for.

“There is no landslide that we are looking at. No way given the numbers that we’ve seen particularly when you start the night in Florida when it’s as tight as Florida tends to be,” CNN’s Dana Bash said.

President Trump then continued on to win Kansas, Missouri, Utah, and three of Nebraska’s congressional districts. This is because Nebraska splits their 5 electoral votes into three districts, with one electoral vote to the winner of each district and two votes to the overall winner. Biden was then called the winner of New Hampshire, Virginia, and Illinois. Biden also won California, Oregon, and Washington, which are states that all went to Hillary Clinton in 2016. Mississippi and Ohio were both called for the President as it did in 2016. The morning of November 4, Biden had 205 electoral votes while 132 went to the President.

“Keep the faith, guys, we’re going to win this,” said former Vice President Joseph R. Biden in the early morning of November 4 with no winner yet declared. gave an encouraging , .  Biden asked for his supporters’ patience as they awaited more results. Iowa was then called for the President, an important part of Trump’s victory while Rhode Island went to Biden.

At 1:20 A.M. EST, the President gained 38 electoral college votes in the state of Texas, a big win that left the Trump base feeling hopeful. He also gainedthree more electoral college votes from Montana. After winning the state, Trump spoke at the White House, attacking the electoral college system and accusing the states of voter fraud. The President said, “This is a fraud on the American Public. This is an embarrassment to our country.” This statement caused shocked reactions from even longtime Republicans. Senator Mitt Romney of Utah, the 2012 opponent to President Obama, tweeted, “He is wrong to say that the election was rigged, corrupt, or stolen.”

Throughout the morning of Wednesday, people awaited numbers from the battleground states. Eyes were on the midwest as millions of votes were being counted in Pennsylvania, Michigan, and Wisconsin. While in-person votes had already been counted, poll workers were tallying mail-in ballots with only 39% counted in Pennsylvania.

As it became the early morning on the east coast, Hawaii was called for Biden which is typically leans democratic. Biden supporters felt uplifted as Biden gained the lead in the state of Wisconsin and was up 22,000 votes against the President. This lead came after an announcement that all the votes had been counted in Milwaukee County with the exception of provisional ballots.

It was then the morning after Election Day, with nine states left to be called. Joe Biden had 224 electoral college votes while President Trump had 213. Part of the delay in Pennsylvania was the decision in certain counties to count the mail-in ballots after everything else. Pennsylvania allowed poll workers to receive and count votes until Friday November 6.

As the day progressed, leads narrowed between the two candidates in Michigan. The victory of the state came down to Wayne County where the margin was 64,000 votes. The lead was also narrowing in Georgia where no democratic presidential candidate has won since  Bill Clinton won the state in 1992. After trailing the President overnight, Biden pulled in front of Trump in Michigan and Wisconsin. Both campaigns expressed confidence in winning the battleground states though that would change for the Trump Campaign later that day when both Michigan and Wisconsin were called for Biden. Proving their frustration, the Trump campaign released a statement saying that they filed a lawsuit against Michigan asking the state to stop counting until the campaign could have a representative to observe the counting and the opening of ballots. However, despite the campaign’s statement, there was no evidence that the lawsuit had actually been filed in the Michigan Court of Claims.

An hour after announcing the Michigan lawsuit, Trump’s deputy campaign manager Justin Clark released a statement saying, “Bad things are happening in Pennsylvania…We are suing to stop Democrat Election officials from hiding the ballot counting and processing from our Republican Poll Observers.”

Biden spoke again the night of November 4 from the Chase Center in Wilmington, Delaware, as he had the previous night. He gave a speech about the vote-counting controversy and encouraged his supporters to be patient during this long wait for the election result.

“Here, the people rule. Power can’t be taken or asserted. It flows from the people. And it’s their will that determines who will be President of the United States and their will alone,” the former Vice President said. Biden also asked his supporters to have faith saying, “Now after a long night of counting, it’s clear we are winning enough states to reach 270 electoral votes needed to win the presidency.”