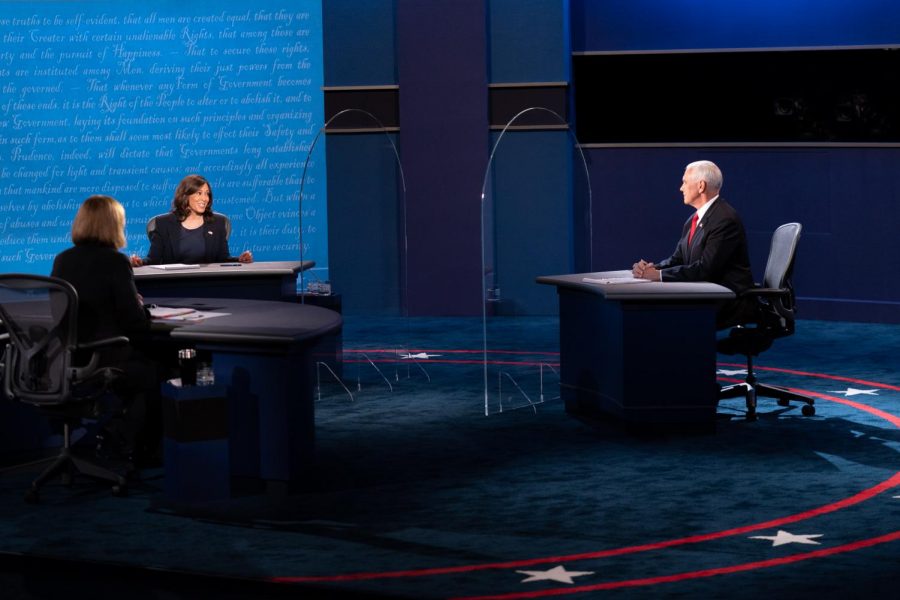 Senator Kamala Harris and Vice President Mike Pence came together in Salt Lake City, Utah for their highly anticipated vice-presidential debate on October 7. In the days before the debate, there had been a COVID-19 outbreak in the White House and to protect the Senator from the virus, the Biden Harris campaign asked for plexiglass shields. The Vice President’s office briefly rejected this request but eventually and begrudgingly accepted the physical barriers.

The only debate between the vice-presidential candidates proved to be an exciting one. Harris, known for her memorable one-liners brought plenty, while Pence kept his composure in contrast to the President during his debate the previous week. Moderated by USA Today’s Susan Page, this debate had less interrupting as it was well-organized and the candidates were more respectful of each other’s time.

On the topic of the COVID-19 pandemic, the first statement went to Senator Harris who began stating the numbers and quoting the rising death toll. She emphasized how she felt the President hid and minimized the severity of this pandemic, calling the White House’s response, “the greatest failure of any presidential administration in the history of our country.”

Pence defended the president, first stating that President Trump’s first decision to suspend travel from China was crucial and impactful even though Former Vice President Joseph R Biden believed doing so was xenophobic. Pence then went to say how President Trump created “the greatest national mobilization since World War II” and added that he remembers the lives lost to COVID-19 every single day.

The moderator then transitioned into a discussion of the White House Rose Garden event on September 26. The Rose Garden reception was packed with 200 people waiting for Trump to announce his supreme court nomination of Judge Amy Coney Barrett. The gathering has since been identified as a “super spreader” event that has caused a COVID-19 outbreak in the White House. Vice President Pence said those who came to the reception “actually tested for the coronavirus” and that it was in the best interest of everyone who attended the event’s health. When asked about a vaccine, Senator Harris stated, “if Donald Trump tells us we should take it, I’m not going to take it.”

Next, the two candidates debated over the economy with a sharp, yet respectful back-and-forth. Harris again opened the topic, laying out the Biden Harris campaign plan for the economy. She included repealing Trump’s newer tax bills, turning money around, and investing it in tax bills to create cleaner energy and innovation. Harris also promised that she and Biden would cut student debt by thousands of dollars and do their best to make public universities free. Pence underscored how Joe Biden will increase taxes and ban fracking which would eliminate several thousand jobs on the east coast.

On the climate change topic, Pence stated that President Trump will “always follow the science” and added that national forest management is at the front and center of their campaign platform. Harris again laid out the full plan for the Biden Harris campaign, including clean energy and their goal of achieving net-zero emissions by 2050. She also mentioned that their plan would create over 7,000,000 jobs for Americans. While Pence did say he was proud of the work on the environment the Trump administration has done, he refused to call climate change an existential threat.

The topic then returned to the economy again as Pence and Harris debated over the Trade War with China that began in December of 2018 and has continued throughout the administration. This exchange was tension-filled due to the nature of the subject. Pence pushed his claim that the Senator refuses to stand up to China as does Biden, saying, “Joe Biden’s been a cheerleader for communist China over the last several decades.”

Harris stood on defense, stating, “What ended up happening is because of a so-called trade war with China, America lost 300,000 manufacturing jobs. Farmers have  experienced bankruptcy because of it.”

This led to a transition to a conversation about foreign policy, something that has begun controversial during the last four years after Trump’s relationships with the leaders of North Korea and Russia. Senator Harris expressed her thoughts recounting a conversation she’d had with former Vice President Biden who described international relations as a friendship. “You’ve got to know who your adversaries are and keep them in check. But what we have seen with Donald Trump is that he has betrayed our friends and embraced dictators around the world. Let’s take, for example, Russia,” said Harris.

Pence chose the opposite route, standing by his claim that Trump is a model of respect for the country.

Susan Page then introduced another controversial topic, the Supreme Court. With the Senate confirmation of Judge Amy Coney Barrett beginning the following week in the nation’s capital, the conversation of the judge is a constant in the media cycle. It was on the topic of the Supreme Court that Pence posed a challenge to Harris.

“Are you and Joe Biden going to pack the Court?” he asked her, referring to a proposal to add new justices to the court if conservative Judge Amy Coney Barrett replaces liberal Ruth Bader Ginsburg on the bench.

In what may have been Pence’s most effective moment of the debate, Harris refused to answer the question directly, instead citing that Abraham Lincoln didn’t appoint a new Supreme Court justice shortly before he was up for reelection.

“This is a classic case of, if you can’t win by the rules, you’re going to change the rules,” Pence said, turning to look into the camera. “The American people would really like to know.”

Unlike the presidential debate last month where both candidates cut each other off mid-sentence, there was an actual debate this time as the audience could hear both vice presidential candidates without interruption and combative candidates. Although Harris and Pence threw fewer jabs at each other compared to the debate between Trump and Biden, the two vice-presidential candidates rarely answered the moderator’s questions directly. The candidates mostly wielded their campaign’s main offensives, Pence on the economy, and how the Biden Harris tickets represented raising taxes, job losses due to environmental policy, and Harris’ criticism of theWhite House’s response COVID-19. The biggest buzz was generated when a fly landed on the Vice President’s head, sparking various memes and the now sold out Biden campaign Truth Over Flies Fly Swatter.

The U.S. General Election will be held on November 3rd with early and mail-in voting starting on October 3 and continuing until Election Day.