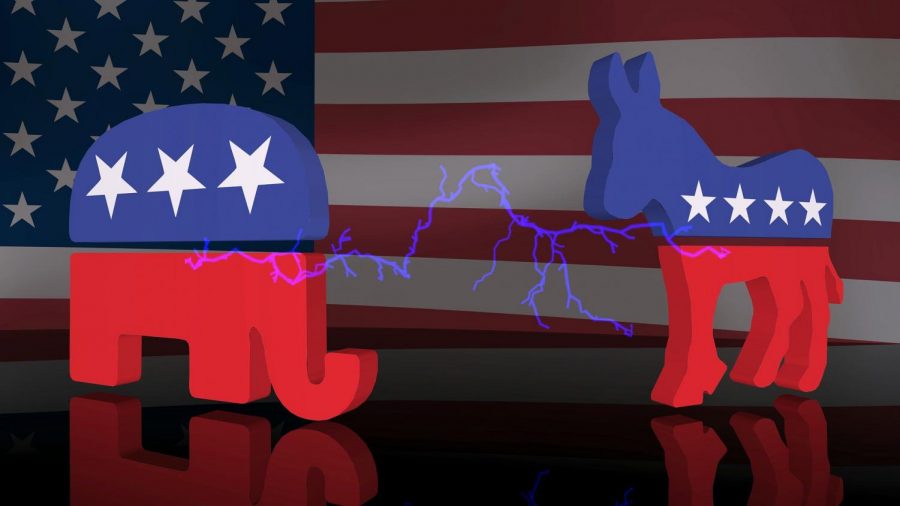 Last night, presidential candidates, former Vice President Joseph R. Biden Jr. and President Donald Trump, had their first presidential debate. The debate was held at Case Western Reserve University and Cleveland Clinic in Cleveland, Ohio, and was moderated by Fox News anchor, Chris Wallace. Complying with social distancing guidelines, the two candidates stood on opposite sides of the stage in front of podiums.

The first presidential debate was filled with personal attacks, interruptions, and what some described as “chaos.” The nominees were constantly talking over each other, cutting each other off, and calling each other names. Biden referred to Trump as a “clown” and even told him to “shut up” in response to repeated interruptions by the President who came out “too hot,” according to Republican supporters. The contempt Biden and Trump had towards each other during the debate was unheard of in the history of presidential debates. The reactions from both the republican and democratic parties highlighted the chaotic back-and-forth dialogue between the two nominees.

We are a better country than was on display tonight.

Former Republican Senator Jeff Flake from Arizona tweeted his reaction to the sparring.

I have a headache, what a mess.

Democratic Representative Ilhan Ohmar from Minnesota posted a tweet about her initial reaction to the debate, which seemed to be a common response from all over the country as people shared their feelings about the contest through social media.

The normal procedure for the presidential debate had been altered for the sake of COVID-19, including no pre-debate handshake, podiums spread widely apart, and the audience limited to the candidate’s staff and family members. There were six predetermined topics up for discussion, including systemic racism, the Supreme Court, and the COVID-19 pandemic. The first topic covered was the open seat on the Supreme Court and President Trump’s appointment of Judge Amy Coney Barrett for the Supreme Court.

Trump opened the debate, stating that he believed Amy Coney Barrett would be a good addition to the Supreme Court and should be confirmed before the upcoming election. However, former Vice President Biden disagreed, stating that the Senate should wait until after the election to seat a new Justice. A major reason why Biden is against Barrett is due to her support for eliminating The Affordable Care Act.

The Affordable Care Act, also known as Obamacare, brought health insurance to 32 million uninsured Americans. Barrett’s disapproval of ACA led Biden to segway into his argument that Trump has persistently tried to strip Americans of their healthcare. Biden then claimed that if Trump got rid of free healthcare, women’s rights would change, and the Americans with pre-existing conditions would be stripped of care.

“Drug prices will be coming down 80 percent. You could have done it in your 47 year period in government,” Pres. Trump interjected following Biden’s statements on the ACA. “Nobody’s done it,” said Trump. In a fact check from The New York Times, Trump’s statement regarding drug prices was seen as exaggerated, citing that while President Trump has signed several deals to lower drug prices, none of them have yet gone into effect.

On the COVID-19 pandemic topic, Biden answered Chris Wallace’s opening statement listing the rate of infection statistics. He also referenced Trump’s downplaying of the severity of the pandemic–information that was revealed in journalist Bob Woodward’s latest book, “Rage.” Biden shared his potential plan to attack the COVID-19 crisis, which includes supplying greater amounts of personal protective equipment and providing small business loans in light of projections that one out of six small businesses may close permanently due to the pandemic.

“We’ve done a great job,” countered Trump. “But I tell you, Joe, you could never have done the job we’ve done. Now we’re weeks away from a vaccine,” Trump added.

In contrast to the President’s comments, Dr. Robert Redfield, the director of the Center for Disease Control, announced earlier this week that the United States might not receive a vaccine until the summer of 2021.

The two candidates then proceeded to discuss the highly anticipated topic of the President’s taxes. On Sunday, The New York Times published President Trump’s tax returns from the last 18 years, something he has consistently refused to do. The story revealed that the President had paid little or no federal taxes in 11 out of the 18 years analyzed by The New York Times, and that in 2017, Trump only paid $750 in federal taxes reporting losses in income. Biden pushed Trump, saying that he takes advantage of the taxes in the United States and compared Trump’s $750 tax payment to a school teacher’s or firefighter’s, both of whom pay thousands of dollars in taxes per year.

“You’re the worst President America has ever had, ” said Biden. The topic of taxes led to a discussion of the U.S. economy.

Biden presented his economic plan to raise corporate taxes to 28% from the current 21%. The President citing a current healthy economy, countered that Biden would lose half of the United States companies with his tax increases. The conflict caused a tiff between the two candidates that included arguments about the stock market crash of 2008 and personal topics such as Joe Biden’s son Hunter Biden. Trump called out the younger Biden, Beau on his cocaine addiction. Vice Pres. Biden defended his son, saying he was proud of him for overcoming his drug issue.

The exchange crosses a rare occurrence during any past Presidential debates for candidates to directly attack a family member of their opponent.

The next topic introduced by the moderator was racism and violence in America. After months of on-going and, at times, violent protests against systemic racism, and in support of racial justice, many viewers were eager to see what the two nominees had to say about their plan to end systemic racism within America.

Biden said he stood for equity and equality for the whole of America and called out the President for staying in his bunker during protests in front of the White House and even sending troops to throw teargas at protestors outside the White House. The President fought back, calling Biden a super predator who has treated the African-American community terribly.

“I ended it because it’s racist. If you were a certain person, you had no status in life-it was sort of a reversal,” Trump said. He asserted that by eliminating racial sensitivity training, he had ended systemic racism.

“Yes, there’s a systemic injustice in this country in education, and work, and in law enforcement,” Biden stated. “And the way in which it is enforced,” he added.

Moderator Wallace then asked President Trump, “Are you willing to condemn white supremacists and militia groups and to say that they need to stand down and not add to the violence or the number of these cities as we saw in Kenosha, and as we’ve seen in Portland?” Trump’s response avoided the question’s specificity, noting that he was willing to do anything to see peace.

When pushed by Biden to take a position on the Proud Boys, an extreme far-right, all-male group that promotes and causes political violence, Trump said, “Proud Boys, stand back and stand by.”

Reactions to President Trump’s statement ran from claims that he condones white supremacy, to the Proud Boys celebratory reaction to the President’s words, saying they are preparing to take action. Many also jumped to social media to question if Trump didn’t denounce white supremacy because he counted on their votes.

The Debate ended on the topic of voting in a very different election year that will see many mailing in their ballots instead of voting in person. Biden promoted his stance on voting by saying all ballots should be counted, and he asked viewers to show up to the polls. “You will determine the outcome of this election. Vote, vote, vote,” Biden said directly into the camera.

Trump took a different, less positive stance, raising concern about possible voter fraud. “This is going to be a fraud like you’ve never seen,” said the President.

“This is not going to end well, ” Trump said. The New York Times reported today and stated that President Trump’s false claim of voter fraud is being used to disenfranchise Americans.

Trump’s criticism of the mailed-in ballots caused another scuttle between the two men even as time ran out, and the moderator attempted to wrap things up amid the tension.

The 2020 vice-presidential candidates, Vice President Mike Pence and Biden’s running mate Senator Kamala Harris will be the next to face off on the debate stage on Wednesday, October 7, in Salt Lake City, Utah.

The president and former VP will meet again for a town hall-style debate Oct. 15 and final debate Oct. 22 in Miami, Florida.

CORRECTION: Hunter Biden had a cocaine addiction, not Beau Biden. We regret the errors.